One of the three components that defined the original CSPT Program mentioned by Rob Walker at the Roundtable discussion on Friday was “theory.” As he noted theory is an ambiguous signifier meaning different things to different types of thinkers. In CSPT it has generally meant a predilection for continental European traditions of theory rather than Anglo-American analytical traditions.

We might take this further. Going back to the original group of individuals who founded the program—John Michelsen and Monica Langer in Philosophy, Rob Walker and Warren Magnusson in Political Science, Bill Carroll and Rennie Warburton in Sociology—there was also a founding theoretical tension between Nietzschean and Marxist modes of critical thought. This was not surprising at this has been a central tension in critical thought since at least the 1960s, although not necessarily one that has been brought clearly into the light of day here in the occupied territories of Lekwungen Territory. I wonder to what degree this tension does adequately describe the theoretical amalgam of the original program, whether the tension has been productive or debilitating, whether it continues to define CSPT now, and to what future and what critical efficacy this tension might lead. 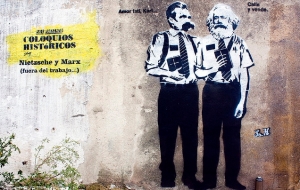 It was interesting that the discussion of the roundtable and the questions afterward on the theme of 25th Anniversary of the CSPT Program and the conference topic—“thinking as a way of life”—could be productively interpreted in exactly the same terms. There was an  emphasis on Marx in the discussion, not only with respect to the problem of the blunt power that accrues to the vast accumulations of capital today, but also with respect to the whole theme of praxis, or the pragmatic value of engaging in critical thought. “Man must prove the truth, i.e., the reality and power, the this-sidedness [Diesseitigkeit] of his thinking, in practice” as Marx says in the Theses on Feuerbach. On the other hand, there was also a running reference to the foundationlessness of the modern condition, (i.e. Nietzsche’s problematic), as a kind of precautionary limitation on praxis. From the existential dilemma of the theory student— 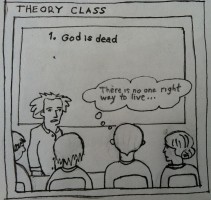 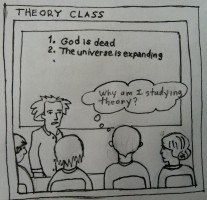 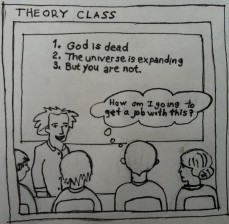 —to the proscription on giving “ontological privilege” to the economic moment in critical analysis, Nietzsche’s presence formed the other pole of the discussion. “Have not all banisters and foot-bridges fallen into the water?”

So in a conscious but undeveloped way the tension between Marx and Nietzsche lives on. With a little rigour it would not be difficult to show that the nuts and bolts on this construct are tenuous and the merry caravan of CSPTers not a little squeaky as a result. To put the problem in one well worn way, how can the universalistic intent of all the forms of critique that look to Marx for their inspiration be reconciled with Nietzsche’s perception that there is no becoming-universal?